The Sounds of Nature: Birding in South Walton

With warm temperatures, a diverse ecosystem and multiple bodies of water, South Walton, Florida, attracts an incredible variety of bird species. Even if you are the most novice bird watcher, it’s hard not to get drawn in once you start paying attention to their calls, colors and behaviors.

Walt Spence – an active member of the Choctawhatchee Audubon Society –recently spoke with us about it. “This is one of the most unique places in the country for bird watching, in terms of diversity,” he said. “When you factor in the number of migratory birds we receive, it’s well over 200 species.”

South Walton sits between two different major “flyways,” which are common routes taken by birds traveling during migratory seasons. Because our beach neighborhoods are positioned between the Northern and Western flyways, we witness species journeying through both routes — often flying during the early morning fall sunrises.

Thankfully, there are countless places to get out and see them around our 16 beach neighborhoods. Deer Lake State Park offers access to both the Gulf, as well as rare coastal dune lakes and forest habitats – including a 1.5-mile nature walk within the pine forest. Point Washington State Forest also has great trails with 3- to 10-mile loops that carry you through a diverse range of habitats, including coastal scrub, cypress swamps and sandhills. And if you don’t have a boat, Thomas Pilcher Park gives you amazing access to water birds on the Choctawhatchee Bay. 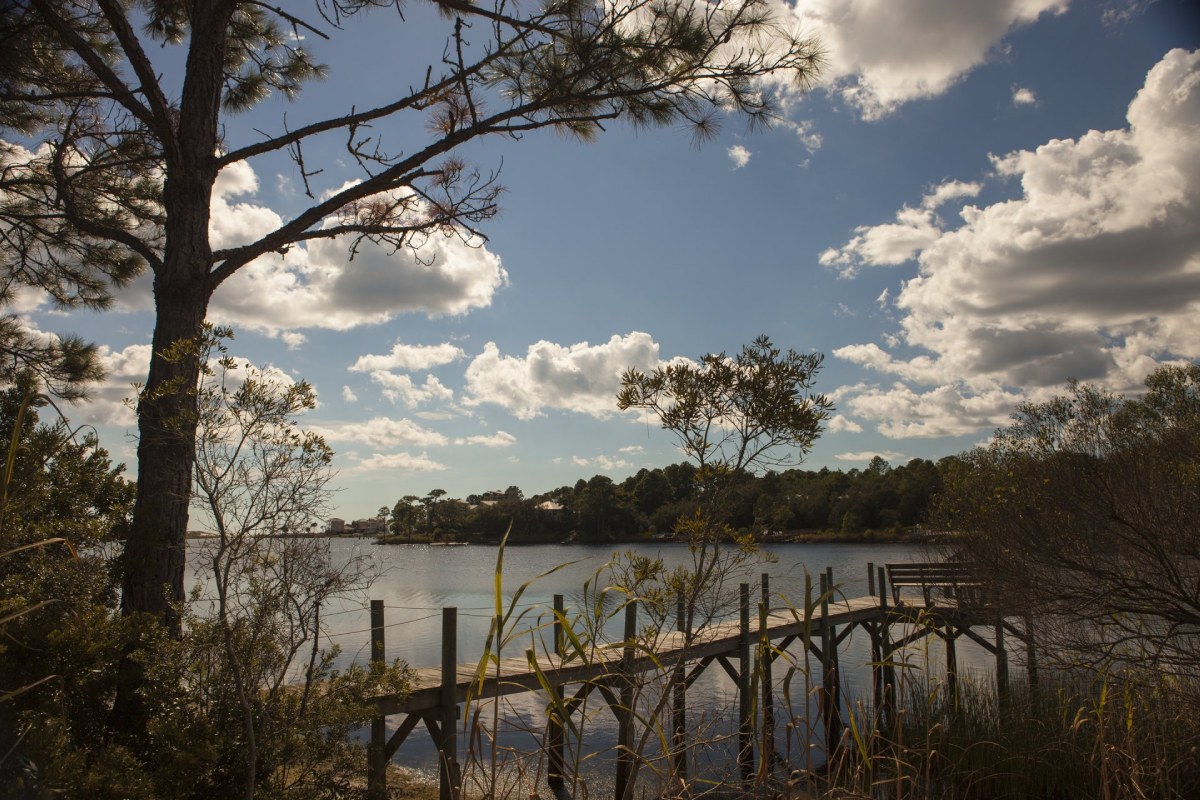 Just as you may be looking for a little getaway from cooling temperatures back home, many species are following the same instinct. “Fall is one of the best times to see migrating birds,” said Walt. “The birds ride down with the cold front as it moves through.”

And birds aren’t the only winged creatures that are drawn to South Walton in the fall. Monarch Butterflies migrate this time of year as well, creating quite a pleasant spectacle for those who come across them.

With nearly 40% of our land preserved for nature, South Walton is dedicated to maintaining these habitats and helping visitors learn more about them. For example, the E.O. Wilson Biophilia Center is an environmental education center in Freeport that teaches the importance of biodiversity, conservation and sustainability. Located on the 54,000-acre Nokuse Plantation, they offer free programs and tours for school groups to get children interested at a young age. 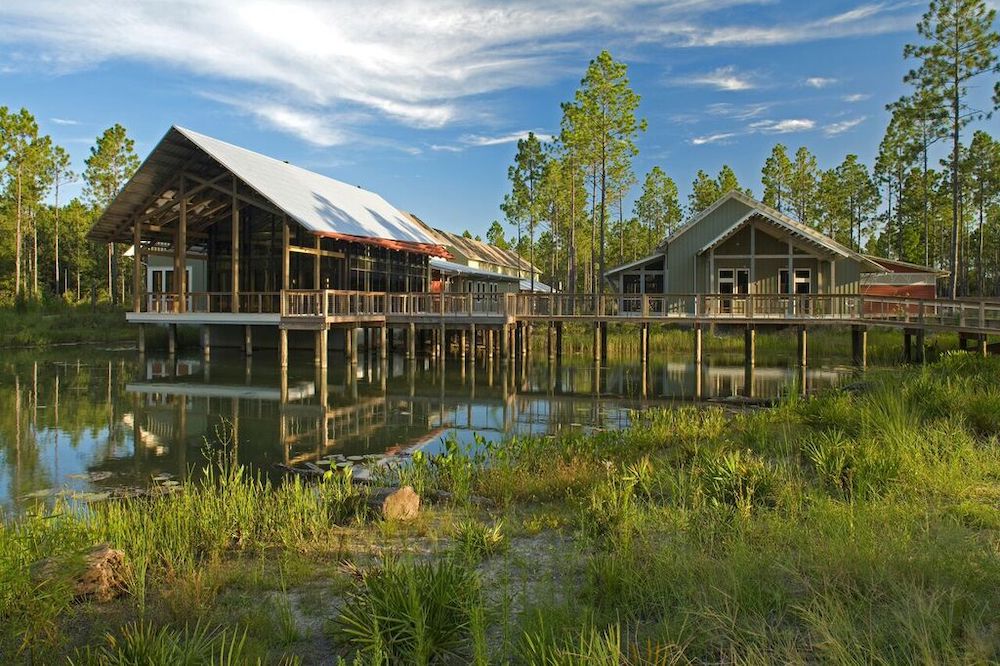 “Birding is just exciting,” said Walt. “There are so many species out there that are so neat and have amazing behaviors. When you start paying attention to the birds all around you, a whole world opens up that you didn’t even know was there.”

So, the next time you’re in South Walton, listen for the sounds of birds wherever you’re exploring. It’s easy to start identifying some of them once you know what to look for. To help you learn about some of our most rare and beautiful species, we’ve compiled an introductory cheat sheet below.

Prothonotary Warbler: “Prothonotary Warblers are beautiful little birds,” Walt said. “They hang around swamp areas and look like little canaries.” This small but striking bird is only found in the Eastern U.S. and parts of Central and South America; in South Walton, you’ll spot it during migratory fall and spring seasons. Its name “Prothonotary” refers to the bright yellow robes worn by Catholic clerks. Listen for its pure, rhythmic, high-pitched song.

Semipalmated Plover: This shorebird species seems to fit right in on our beaches, with its sandy white chest and seashell-brown feathers. Head to the quiet shores of a beach neighborhood like Inlet Beach to watch the Semipalmated Plover scurry through sand and pick out tiny crustaceans and insects to eat; listen for its quick high-pitched whistle.

Osprey: Look for this raptor flying over South Walton’s waters as it searches for food. Listen for the Osprey’s high-pitched chirp — it’s one of the most common sounds on our beaches.

“The most entertainment I get from any bird here is from the Ospreys,” Walt said. “They’re fascinating to watch hunt. They circle overhead until they find something; and then they dive. They dive straight down and directly into the water — unlike other similar species. Sometimes they catch a fish that’s so big, they can’t even get airborne with it in their mouth. They have to drag it to shore.”

Great Horned Owl: With vibrant yellow eyes, pointy ears and a speckled coat, the Great Horned Owl is easy to spot — if you happen to be bird watching at night, that is. Look for this beautiful owl in the densely wooded parts of parks like Deer Lake State Park or Grayton Beach State Park. You might even spot one along the nature trail in Alys Beach. Listen for its rhythmic song and loud hoots during the evening!

Red-Headed Woodpecker: With a bright red head, a snowy-white chest and dark grey wings, the Red-Headed Woodpecker is difficult to miss. Find this rare bird among the oaks and pines in South Walton’s parks and forest, and listen for its quick wood-pecking taps or the sound of its shrill, short call.

Laughing Gull: “You find Laughing Gulls here pretty much year-round,” said Walt. “They have a very loud, piercing call that does, in fact, sound a bit like laughing.”

The graceful Laughing Gull typically stays near the beach, rarely going inland and often flying in a group. Gulls are social birds, and unafraid of people — so you’ll spot them flying around lively beach neighborhoods like Sandestin. Watch them dive and swoop into the water to catch small minnows and fish.

Bald Eagle: With the third-largest Bald Eagle breeding population in the United States, Florida is home to a number of these beautiful birds. Although the Bald Eagle was once endangered, this species has flourished in recent years due to preservation efforts. Listen for its high-pitched, sputtering call and watch for groups of Bald Eagles gathering together during the summer breeding months.

View More
Fall In Love With South Walton
Learn How You Can Save Endangered Sea Turtles
Your Guide to One of America’s Most Romantic Towns
Dining with a Purpose: Local Restaurants Support Oyster Reef Program
How to (Legally) Host a Beach Bonfire in South Walton