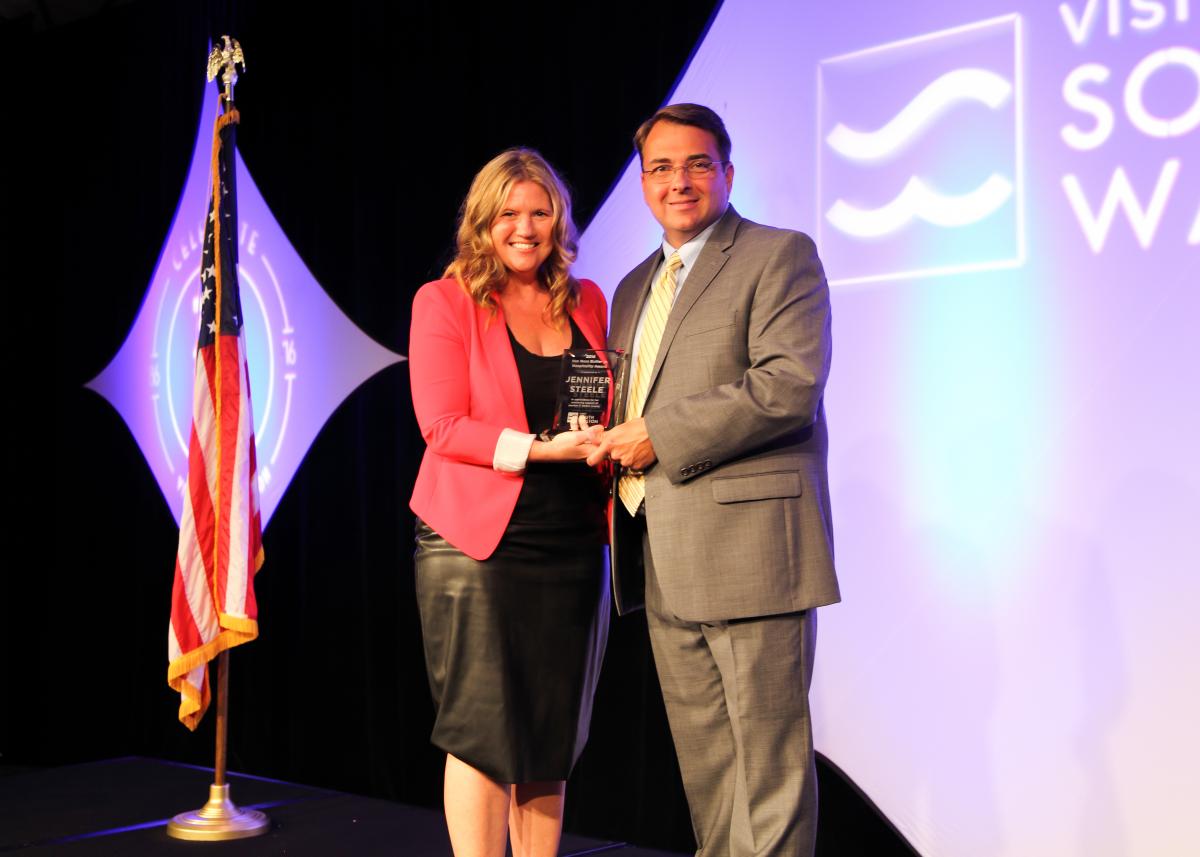 “We are proud to present the TDC’s highest honor to Jennifer Steele for 2016,” said Jay Tusa, Executive Director for Visit South Walton. “Tourism in South Walton succeeds through the efforts of dedicated, enthusiastic and innovative people and this award recognizes an outstanding woman who has made a significant impact to enhance South Walton as a destination.”

Steele, who summered in Grayton Beach as a child before receiving her BFA from Valdosta State University, moved to the area in 2000 to co-found the Seaside Reperatory Theater (The REP). After serving as the Managing Director there for seven years, she owned a consulting firm for non-profit organizations before taking the helm as executive director of the Cultural Arts Alliance (CAA) in 2008.

“Jennifer Steele has made it her life’s work to bring, foster and nurture all aspects of one of South Walton’s most beloved, unique and valuable commodities: Art,” wrote Stacey Brady, Director of Marketing and Communications for Grand Boulevard in her nomination. “She has guided the Cultural Arts Alliance to initiate and oversee many of the most popular and important events in our market.”

In less than a decade, Steele has led the CAA to become a successful arts organization which supports local artists and students with grants, workshops, event productions andThe Foster Gallery, a newly opened artist co-op featuring at least a dozen artists on seasonal rotation.

“There is one dominant theme throughout her career: the belief that art in its many diverse forms not only brings enjoyment, meaning and understanding to our lives but also creates an economic engine that drives commerce through tourism” wrote Russell Carter in his nomination.

Through the CAA, Steele has spearheaded several of South Walton’s most successful events including the nationally acclaimed 30A Songwriters Festival, Valentine Tour of Homes, ArtsQuest and Seaside Writers Conference (now known as ArtsWeek South Walton), South Walton Fashion Week, A+ Art Series and the Flutterby Festival.

“With each South Walton branded event, the marriage of art, beach, travel destination and South Walton has been elevated and cemented,” added Brady. “One of the most compelling aspects of Jennifer’s work is that the arts-based events are able to touch on every wonderful and note-worthy cultural aspect of our community.”

At the Bayou Arts Center, a TDC owned and maintained facility, Steele has headquartered the CAA and overseen dramatic growth in programming and grant awards made to teachers, students, artists and other arts organizations.

Steele also serves or has served as Chair of Walton County’s RESTORE committee, as a member of the Tourist Development Council, as a board member for the A Better South Walton nonprofit organization, and as Chair for the TDC’s advisory committees for New Product Development and Arts, Culture, Events and Activities.