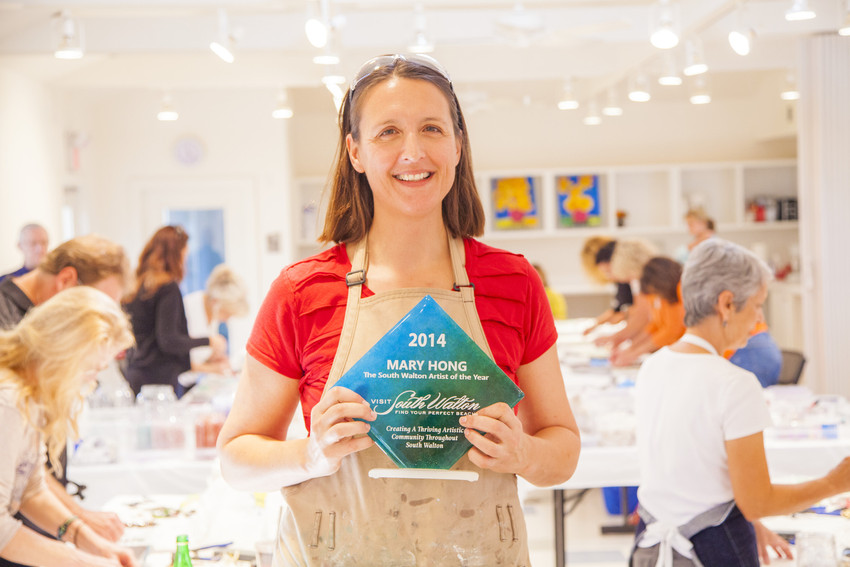 Mary Hong served as the 2014 South Walton Artist of the Year.

Originally from Wisconsin, Hong received her undergraduate degree from the  University of Wisconsin-Madison before enjoying an 18-year career as a flight attendant. She mixed her passion for travel with art by freelancing as a graphic artist at her home in Hawaii for nearly 15 years.

Hong and her husband, a commercial airline pilot, relocated to the Northwest Florida Gulf Coast in 2004. She joined the Eglin Aero Club to complete her multi-engine commercial pilot’s rating before giving birth to twins in 2006.

Having developed a unique art form that combines paint and glass on canvas that is now sold in eight states and seven galleries in Florida, Hong grew an impressive base of fans and followers of her art. This has led to the success of her own gallery and art-making studio that has piqued the interests of locals and visitors alike: Mary Hong Gallery and The Shard Shop.

A professional artist for more than 20 years, Hong has been working with glass for the past 13 years. She uses a dimensional glass technique to stand glass rigidly on its edge to allow light to pass through while reflecting colors and textures onto a surface. Her work is inspired by South Walton’s coastal environment with her use of marine life, birds, and coastal landscapes and is all created with recycled glass which aligns with South Walton’s focus on preservation and sustainability.

She finds inspiration in the South Walton landscape, beaches, coastal dune lakes, and pine forests throughout the nature preserves that make up 40 percent of South Walton, She says she is also inspired greatly by the South Walton color palette which features shades of turquoise, teal, sliver, and other windswept hues that work well in her art. 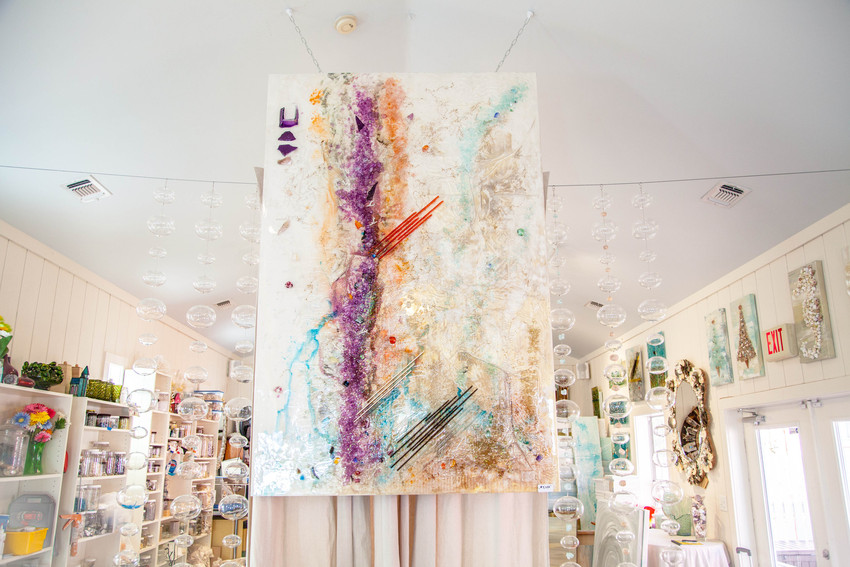 Hong's work has been featured in Atlanta Bridal, The Local Palette, The Chicago Tribune, Vie Magazine and on the cover of Coastal Lifestyle magazine and was recently highlighted on the Golf Channel’s Morning Show with Matt Ginella. Last year, John Richard, a high-end home furniture and accessories company, began producing giclee prints of her work that are now sold to retailers around the world, including at Neiman Marcus and Horchow.

Her commissioned work as part of the Walton County Tourist Development Council (TDC) Artist of the Year program is on public display with the art collection at the Visit South Walton Visitor Center located at 25777 US Hwy 331 South in Santa Rosa Beach, Fla.